Thank you to the cast and crew who shot in three locations in ten hours of filming during a rainy Sunday in San Francisco. We were pleased to end the day at the beautiful location of Taste, a local tea shop owned by Vincent Fung. You can get a glimpse of this space so generously donated to us.  Stay tuned, loyal Shadow Angel Films fans, for the results of this shoot!

Amidst a city buzzing with activity (Annual Bay to Breakers! Solar eclipse!) was the hardworking cast and crew finishing the three-day shoot of PEDRO FALLS, the 8th short from Shadow Angel Films! Congratulations and thank you for your awesome-ness! 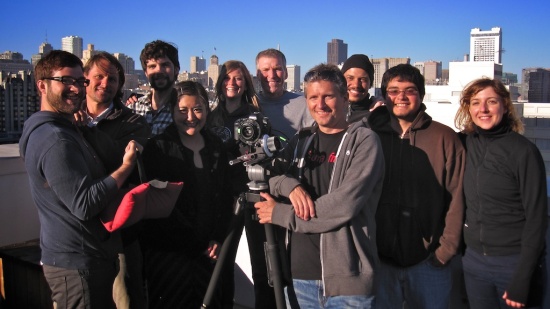 We’re bursting with excitement over the amazing footage we got on Saturday and Sunday with our cast and crew! At the beach, we got just the kind of weather we wanted: foggy, mysterious, windswept. We were also stunned by pods of leaping dolphins close to the shoreline. Downtown at the parking garage, we were less thrilled with the ongoing workers’ protest less than a block away. We eventually got the necessary dialogue recorded during a bout of silence, and many kudos to the AWESOME cast and crew who kept up their good spirits despite the frustrating circumstances. All in all, good days to be filmmakers!

Just enough time left in 2010 to shoot another AWESOME film, thanks to the very wonderful cast and crew. Thank you for bringing your dedication and many talents to the production of NOT GETTING MARRIED! From left to right, beginning in the back row:

What an incredible ride on the bus! With such a hardworking and talented cast and crew, we ran right on schedule and got all the shots we needed.

Check out what happened on the bus and see how fast the day went by for us!

We’re still in need of your help in getting all the way to our pledge goal on Kickstarter! Please alert your network that there’s a great film project they can support for just $5 or $10, and send them our way. And thank you, dear backers, for all the lovin’ you’ve already given!

Shadow Angel Films survived and thrived during the all-night shoot (8pm – 11am)! Were there early morning hijinks (Alex and Eric, you think you’re so clever with those C-47s and tape, but remember, a good director has eyes in the back of her head)? Did we indulge in bacon at 3am? Did beer bottles explode? Yes!

All that and more moviemaking fun than you could imagine. Let’s just say only the actors ended the night looking as fresh and pretty as when they started! But thanks to an AWESOME crew, we have great footage to start editing!

We just finished up two great days of shooting! We shot all but one scene outdoors, which is a risk in the rainy season here in the Bay Area. But we sailed through with just a few hours on Sunday scrambling to hold an umbrella over the camera. See some behind-the-scene production stills on flickr here and here.

Just uploaded to flickr some awesome photos taken during the production of Shadow Angel. We had a great time on the shoot, I think you can tell.

Today we shot a spur of the moment short, Get Her, as an excuse to try out my new 35mm lens adapter. Hope to post it in a few days. Gonna get Eric to record some music to go along with it first.

But here’s a frame grab from the shoot. Natalie messing around, defying gravity!